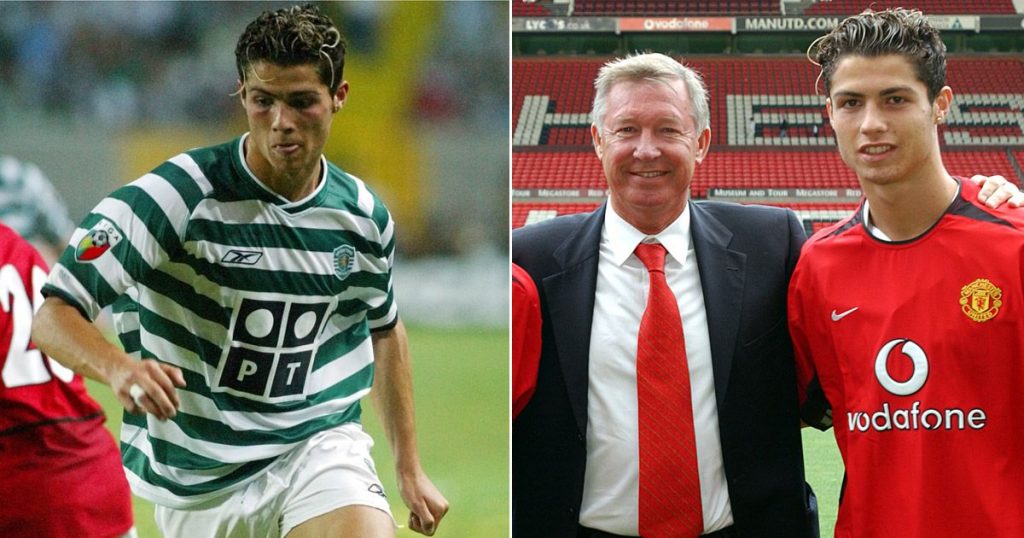 This is Manchester United football club, this is the theatre of dreams.

In June 2002, Carlos Queiroz who’d managed Portugal, South Africa and Sporting CP, arrived at Old Trafford to become Ferguson’s new assistant. During his first tenure at the position, the Portuguese tactician played a vital role in the setting up of a working relationship between United and Sporting CP. The informal alliance saw the two sides share coaching advice.

As Ferguson recalled in his autobiography, Queiroz immediately told him: “There’s a young boy at Sporting, and we need to keep an eye on him.

“Carlos said we need to act because this boy was special, and so we sent Jim Ryan to watch him train as part of our reciprocal deal. Jim, the head of the Manchester United Youth Scouting department at the time, returned and said, ‘Wow, I’ve seen a player. I think he’s a winger, but he’s been playing centre-forward in the youth team. I wouldn’t be waiting too long. At 17, someone will gamble.’”

The United head coach then asked his assistant to see to it that the premiership side touches base with the player. Queiroz spoke to the Sporting CP club president and they agreed to allow United to sign him two years down the line.

A year later, a jet lagged Manchester United squad wearied from an extended pre-season tour of America stumbled off a plane in Lisbon. They were in the Portuguese capital to fulfill one of their contractual obligations of their bilateral agreement – to take part in a commemorative friendly against Sporting CP, who were marking the opening of their new stadium which would be used to stage several games in the following year’s European Championship.

Carlos Queiroz wasn’t part of the United contingent present at the stadium as he had been sought by Real Madrid and he left United to go manage them. Unfortunately for him, his time there was not a positive one and he returned as United’s assistant that following summer, just as Rooney was being signed from Everton.

A Sporting CP player wearing the No. 28 on his back, braces on his teeth, a plaster covering a garish diamond earing and frosted tips ran Man United ragged the whole match.

The first victim of “one of the hottest prospects in Portuguese football” (according to The Guardian match report) extensive box of tricks that evening was former United defender Mikael Silvestre. The Frenchman told Bleacher Report, “It was an incredible performance to watch that night, this kid nobody knew tore us apart for the whole game. No one could get near him; he was amazing. At the start, no one had even heard of Ronaldo, but by the end, everyone knew about him.”

In his book, Ferguson wrote that he told his kit man, Albert Morgan, ‘Get up to that directors’ box and get [United chief executive] Peter Kenyon down at half-time.’ I told Peter, ‘We’re not leaving this ground until we’ve got that boy signed.’

Peter asked: ‘Is he that good?’

‘John O’Shea has ended up with a migraine!’ I said. ‘Get him signed.’

The second half saw Ronaldo and co. pick up where they left off in the first half, albeit this time in their away kit. The match eventually ended in a 3-1 home win but the Sporting CP–Manchester United story was far from over.

Ronaldo described the evening, in which Sporting defeated Man United, as “perfect”, even being brought into the United dressing room at full-time.

“After the game some of my team-mates said: ‘Listen, you’re going to go to Manchester, trust me!’

Before leaving Lisbon that night, Man United decided to bring the deal forward instead of waiting another year. Ferguson in the presence of the Sporting CP club president, Ronaldo’s lawyer, agent and the teenage player himself, still in his kit, posed the big question.

And so it was, in a small side room off the dressing rooms at the brand new Estadio Jose Alvalade, that a £12 million transfer was rushed through. Just as his team-mates had predicted, Ronaldo’s time at Sporting CP was up while his career at Man. United had just kicked off.

A few days later, Ronaldo with his loved ones and representatives in tow flew to Manchester on a private plan to put pen to paper. This, however, was not the first time Ronaldo and his team had flown to England with the same intention.

Early in 2003, Ronaldo seemed destined for Arsenal. He even travelled to north London to meet the Arsenal manager and have a tour of the club’s training ground. Arsène Wenger spoke to Ronaldo in his office and even promised him the shirt number he wanted: 28. Sadly, the deal fell through and Wenger was left to rue the missed chance; later on terming it as the biggest regret of his entire managerial career.

Cristiano hired Jorge Mendes as his agent in the summer of 2002, citing that he felt a great empathy with him right from the very first moment.

“The Cristiano Ronaldo of the agents” in the documentary film Ronaldo (2015) disclosed: “With Cristiano, in 2003, he was at a time with one year left in his contract with Sporting. I was with Juventus, Inter Milan, (AC) Milan, Real Madrid, Barcelona, Valencia, everybody wanted Cristiano. Everybody! But they wanted to keep him in Sporting one more year […] Sir Alex Ferguson came and he told me, ‘Leave it with me. He will come now with me and at least he will play 50% of the games. I promise you.’ That was the key.”

United also made an irrefutable financial offer on top of the promise of sufficient game time. Whereas other clubs were ready to pay a maximum of £8m, the Manchester club forked out £12 million, a British record for a teenager who was yet to even feature for his national side.

Indeed, the fee paid for Ronaldo was similar in scale to that which Chelsea paid the Red Devils for the much more established Juan Sebastian Veron – £15 million – just a week beforehand.

On August 12, 2003 Manchester United completed the signing of the Portuguese teenager and agreed a five-year contract with the player. Ronaldo said: “I am very happy to be signing for the best team in the world, and especially proud to be the first Portuguese player to join Manchester United. I look forward to helping the team achieve even more success in the years to come.”

For his jersey number, Ronaldo asked for 28, but instead the gaffer handed him 7. “You’re gonna deserve to put this shirt on your body because you’re a fantastic player,” Cristiano Ronaldo reminisced in his congratulatory video message to Sir. Alex Ferguson for receiving the “Diamond Award” for the Sports Personality of the Year in 2013.

Back in ’03, during his unveiling, the Man United head coach defended his decision to award his latest signing the much prized no.7 shirt that was once worn by the likes of George Best, Bryan Robson, Eric Cantona and David Beckham stating: “It’s not a matter of who do we give this no.7 to. I think it was appropriate a young player like Ronaldo should take it. Because he’s hopefully going to be at the club for a long long time.”

As cameras clicked away at the new pair of signings (Ronaldo and Kleberson) during their photo op on the Old Trafford football pitch, it seemed almost unreal how far Ronaldo had come in such a short time, even to Ronaldo himself. In a 2019 interview with Piers Morgan for ITV, the richest soccer player in the world confessed: “Never, never, it never passed in my mind ay I’d even have the opportunity to play as a professional player. To play in Sporting, for example, and Manchester… never!”

Ronaldo’s father was an alcoholic, an addiction his wife believed was caused by PTSD. Jose took part in the Portuguese colonial war in Angola and returned home an angry man because of it. His mom was cleaner and a cook who at one point came close to aborting the future superstar because of their then impoverished life.

Ronaldo’s journey to soccer stardom began aged seven when he began playing for local club CF Andorinha, where his father was the kit man. Aged 10, he signed for CD Nacional, his first professional club. Two years later, he left Madeira to join Sporting Lisbon after a successful three-day trial.

The move to Sporting Lisbon at age 12 was both huge and emotional for the player and his family but they fully supported his decision. His father encouraged him by saying: “If this is what you want, go, try and let’s see what’s going to happen.”

Hugo – the eldest son – also drank heavily and used drugs. Thankfully, with the help of his family, he was able to get his life back on track. Mum Dolores has previously explained how her younger son helped his older brother: “I paid to send Hugo away to a specialist clinic for treatment. I was working as a cleaner, earning only £400 a month and I had to take out a loan.

“Cristiano was 16 then. He was earning more and paid for his brother’s treatment. There’s no doubt his money helped to save Hugo.

“Things might have turned out a lot differently if Cristiano hadn’t been a footballer.”

At age 17, Ronaldo had managed to break into Sporting CP senior team.

Less than a year later, on August 16, 2003 , ten days after the legendary Manchester audition, Ronaldo would announce himself to the Premier League coming on as a substitute in the 61st minute for his new club against Bolton Wanderers at Old Trafford.

To the 67,647 fans in attendance, the 18-year-old was just one of five signings the Red Devils had brought in for the summer. To his family, CR7 was a man who had broken what we Africans like to call generational curses.