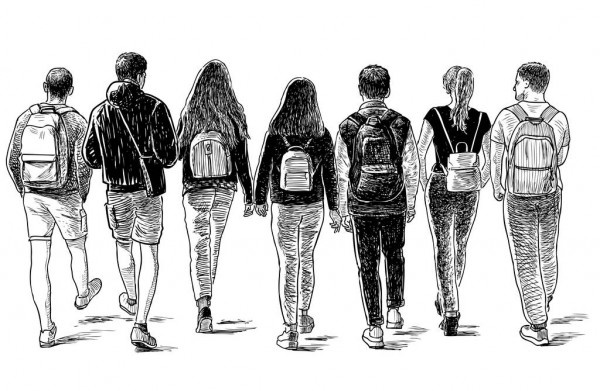 Hurry is not of the devil; hurry is the devil.

Up until this point, it’s been a hurry.

In the beginning, the rush was instigated by our peers, who were a constant fixture throughout our schooling life. Now, as life is unravelling for everybody and we are being integrated into the social fabric, the competition has turned psychological.

To understand how it came to this, we must first a take trip down memory lane and hearken back to when we fully came into our stream of consciousness.

We spent our teenage years in a hurry to grow up. And since we couldn’t fast forward time, we brought adulthood to us by embracing what we thought was the only thing adults did full time. Vices.

I might come here thumping my chest and talking as if my pants are falling off my waist but truth is I am a nerd. I’ve always been a nerd. In fact, I am such a nerd, it’s embarrassing. I am nerdier than the Nerd Herd; Chuck, anyone?

The only reason this blog is not corny af is because I went to the school of hard knocks. I attended five high schools; one, two…five. In a period of five years; one, two…five. I’m not implying they were bad schools, far from it. These were wonderfully meritorious institutions which played a key role in the formation of our personalities and character. Some even going as far as setting up a scholarship programme for needy students gifted in academics or extra-curricular activities.

Initially, I was selected to join a public provincial school. The year was 2008. My parents were still reeling from my 2007 KCPE performance. I had missed out on 400 marks and more importantly, a possible admission to a national school by fine margins. They felt I hadn’t applied myself fully but if you ask me, they had unrealistic expectations. I had never scored 400 marks to start with. Throughout my candidate year, I had posted results consistent to what I scored in the final exam. If anything, my final score was proof that I was well within my capabilities.

The pressure of gaining admission to a national school was off the charts. Going to these schools was our parents dream, not ours. It gave them something to brag about amongst their peers. Not only were they comparing lifestyles but children as well. Interestingly, they themselves had never set foot in the very schools they clamoured heavily for. In a bid to ensure they got to live their dreams through us, we were made to believe success in life starts by you attending a national school. People who get accepted there would forever be the head and never the tail, while the rest were damned to be ne’er-do-wells.

If that is not enough, teachers would reinforce this ideology by shamelessly lying to us how our KCPE results would be a defining factor when seeking gainful employment. They claimed employers eliminate candidates based on their O levels performance. I know walimu will claim they did so in good faith – to motivate us to study harder but honestly, WTF! And you still wonder why students end their lives after receiving undesirable results?

I was a boarder during my final year and it is such insinuations which made my fellow pupils wet their beds almost on a daily as the exams drew nearer. Sure, I experienced anxiety as well but never to that extent. Never for one moment did I believe that my whole life was riding on a single outcome. I honestly just could not wait to be done with primary school and play video games uninterrupted.

My love for video games complimented my love for rock music well. Yeah, sure, I bump ni**as with attitude heavy but this happened later on and was largely influenced by the high schools I attended. Rock music is my first love. I can’t tell you how and why rock music appeals to me but all I know is I heart it. Or, in the words of a fellow writer, gamer and rock head, David M. Grimm; F*** all other artists. Rock artists are the real poets.

I started listening to rock music even before I knew the genre’s name. At first, I used to refer to it as a sub-genre of RnB. My plug for new rock songs was, you guessed it, video games. I am yet to play a game which does not embrace the genre in its soundtrack list. Thanks to this, I started having Rockstar dreams (pun intended). The dream was and still is to be in a rock band. If not in this life, then the next.

By virtue of being a dork, I cannot become the face of the band. I feel like the front man is the fall guy. They are put on the spot for being under the spotlight. I just want to get on stage, do my thing and retreat back into the shadows at the end of it. I picture myself as a guitarist or a drummer. On the strings, I will be shredding it like Slash or Mark Tremonti. As a drummer, I will break a sweat stretching the membranes like Travis Baker or Dave Grohl. Either way, I will rock!

I went to private schools where student unrest was part of the school calendar of events. Where short breaks were smoke breaks. Where students could forget to carry their CASIO FX82-MS calculators but never their prohibited mobile phones. Where if you, a fellow student decided to stand in front of us then you had to be, for your own sake, entertaining. Where if you, the teacher, gave us an inch then we would turn the whole class into a market place. Where if your – a religious leader – sermon was not lit, you’d be forced to keep or share the closing prayer with yourself. And lastly, where you’d pray to God to get any grade except a Y in the national exam.

I studied with crooks and thugs; Bloods and Crips; Woo’s and Choo’s; BG’s and OG’s; You guy My guy and Odi’s. Some whose family name preceded them and others whose last name is as good as Wanjiku. Kids who enjoyed the trappings of power and others who if they opened up, you – not they – would tear up as they narrated the cards life dealt them. Yup, I experienced the best of both worlds. Unamezea? Yee dig?

These schools had no special requirements for admission. All parents had to do was pay fees then their delinquents, sorry, children would be accepted as is. This is why I was able to hop from school to school with ease. It did not matter what grade you scored, what school you came from or why you left, you’d get bundled together with the rest of the misfits, castaways and stones the builders rejected. The unofficial school motto across all five learning institutions was: We Do Not Take The Cream, We Make Our Own Cream.

And that’s the thing, none of us were A students. The best score to be posted was an A-, and I don’t think they even exceeded five in all examination centers combined. Ironically, exemplary academic performance still wouldn’t make you popular, what made you stand out here was everything but academics. We were a bunch of C students who believed, no matter what, we will go on later to get the real A’s in life.

Before I was slightly ashamed of my school voyages. I desisted from talking about them because I felt it portrayed me in bad light. I mean, how many people do you know who’ve gone to as many schools?  I cannot tell you the number of times I was ridiculed for being unable to stick it out till the end. What hurt most is even outsiders (neighbours and family friends) felt entitled to voice their opinion. I almost threw away a lifeline, an admission to the fifth and final school, simply because I felt what everybody was saying about me was true. That I was a spoilt brat and a quitter who would have been better off as a stillbirth.

But looking back now, I am an aggregate and an amalgamation of all five m.A.A.d schools. A proud alumni, for that matter. In my case it was either five high schools or five universities and I believe I chose the lesser evil. Switching schools like a professional athlete switches teams made me realize what it took Winston Churchill sixty years to realize.

Nobody is ever thinking about you in the first place.

In the first couple of schools, I was a people pleaser. I risked my neck for my fellow students more times than I am willing to admit, doing things I didn’t have to do, out of fear of being forgotten. I was the classic yes-man.

Now, more than a decade on, I can’t help but feel disappointed because the same people I bust my ass for have never reached out. I am not interested in a get-together reunion. A simple friend request or follow for follow will suffice. Like seriously, I spent a year each in these academies yet it feels like I was never there in the first place.

Occasionally, in-between venting, I re-examine myself only to realize I am no better. I can’t even recall the first name – the first name! – of my desk mates, let alone class mates in the third and fourth school. It’s like I was never there in the first place as well. Well, at least I can remember their faces…I think.

Every day we come across so many faces, personalities and characters, and it’s typical to think we have left a lasting impression on everybody we cross paths with. That we established a connection or shared a moment which will last forever. However, the reality is we all exhibit similar mannerisms and behaviour. We are all the same. Same script, different cast.